To promote traditional Chinese culture and cultivate patriotism among students, Cheng Yu Tung College (CYTC) of the University of Macau and Yuan Pei College (YPC) of Peking University recently jointly held an online exchange programme for their students. The theme of the activity is ‘A Journey through History’. During the activity, students from the two universities studied in pairs and participated in various activities to learn about Chinese history and traditional culture.

This annual exchange programme was first launched by the two universities in 2015. Every year, between eight to ten outstanding undergraduate students from CYTC and YPC form peer groups and visit each other in a one-week study tour. During the visit, the students not only live and learn under the same roof, but also experience local culture together. Because of the epidemic, the visit of CYTC students to YPC this year has moved online. Wong Seng Fat, interim master of CYTC, and Li Meng, master of YPC, each gave a speech at the online opening ceremony.

Gong Yingxue, associate master of CYTC, and Sun Feiyu, associate master of YPC, joined the activity from the beginning to the end. Under the arrangement of YPC, Zhang Jianwei, associate dean of the School of Archaeology and Museology of Peking University, gave two lectures on the profound history and culture of traditional Chinese architecture to the students. To enhance the students’ knowledge of the history of Beijing, Tang Xiaofeng, a professor in the College of Urban and Environmental Sciences of Peking University, delivered an academic lecture on the urban history of Beijing. The students also watched the classic film Postmen In The Mountains with Prof Sun, who shared his insights on the film based on the social characteristics of China in the early 80s. In addition, the students experienced traditional Chinese culture through a seal carving lesson and playing Chinese chess. 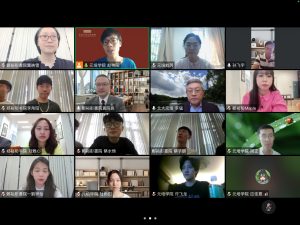 A lesson on seal carving: 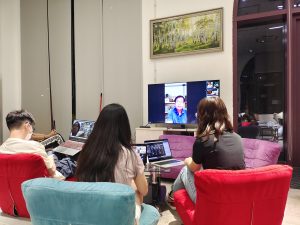