Cheng Yu Tung College (CYTC) of the University of Macau (UM) recently organised a six-day online exchange programme for  students from Yuan Pei College (YPC) of Peking University. During the activity, ten students from Peking University visited CYTC through the internet. The theme of the programme is ‘A Journey through Macao’s history and culture’. Through the programme, students from CYTC and YPC gained an in-depth understanding of the history, culture, and customs of Macao, which helped them appreciate the east-meets-west cultural heritage of Macao and strengthen their sense of belonging to their home country.

Wong Seng Fat, interim master of CYTC, attended the opening ceremony and delivered a speech. During the exchange programme, students from the two colleges studied in pairs. Gong Yingxue, associate master of CYTC, and Sun Feiyu, associate master of YPC, joined the students from the beginning to the end of the programme. Although the programme was conducted on the internet, the various activities gave students firsthand experience of the integration of Chinese and Western cultures in Macao and the special social landscape where tradition and modernity coexist in the city. Students of CYTC recorded videos about UM and Macao to help YPC students learn about the city’s history and culture. Under CYTC’s arrangement, students from both colleges enjoyed the film The Bewitching Braid, which is the first film that has presented Macao’s local culture. Shi Wei, associate professor in the Department of Communication of the Faculty of Social Sciences (FSS), made a commentary on this film, which gave students a deeper understanding of the contradictions and integration between the Portuguese and Chinese communities in Macao in the 1930s.

In addition, Xu Jianhua, head of the Department of Sociology of the FSS, gave a lecture on parallel trading and smuggling in Macao. During the lecture, Prof Xu explored the social reasons of parallel trading and smuggling in Macao by analysing the data collected from interviews, observations, and official statistics. In addition, Fu Qi, associate professor in the Department of Accounting and Information Management of the Faculty of Business Administration, gave a lecture on etiquette rules at formal dinner and in daily life. Finally, Prof Wang Di, chair professor in the Department of History of the Faculty of Arts and Humanities, gave a lecture titled ‘China is Wakening Up – the May Fourth Movement under the American media’ to help students understand the May Fourth Movement and its history comprehensively.

At the closing ceremony, students from the two colleges shared anecdotes of their college life, highlighting the importance of the college education system in helping them achieve well-rounded development. They also had a lively discussion on the topic of ‘future career planning’. At the end of the event, the students summarised their achievements in this exchange programme and shared their thoughts on the integration of Chinese and Western cultures as well as the social and cultural background of Macao. The students and teachers who joined the programme expressed hope that the two colleges would continue to hold exchange activities and maintain a strong friendship.

CYTC and YPC established an annual exchange programme in 2015. Every year, between eight to ten outstanding undergraduate students from each college visit each other and form peer groups for a one-week study tour. During the visit, the students live together, learn together, and experience local culture together. In June 2022, YPC organised a five-day online visit for CYTC students. 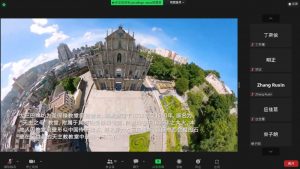 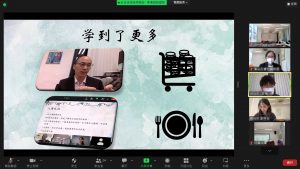 A student  expresses opinion during an online academic session

A group photo of UM faculty members and students 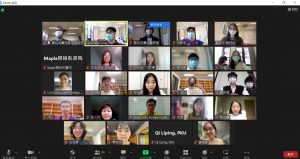